The Holocaust of the Roma and Sinti represents an open wound to the coexistence between various cultures, not only in the Czech context, but also in the European one. This rupture, which causes and consequences go far beyond the existence of the so-called Gypsy camp into the past and the present, can only be healed through the quest for a common dialogue. The proposal for the Memorial in Lety u Písku attempts to initiate a polyphonic dialogue through landscape and architectural means. It seeks to remind and reveal the individual layers, to understand the relationships between them and to further develop the diversity of the place, witness of this bent destiny.

The concept for the new Memorial restores the cultural and natural landscape that has been devastated in recent decades by a large-scale pig farm, whose machinery has in a way concurred the former labor camp. With few exceptions, the design removes the pig farm facilities, eliminating the environmental and mental burdens associated with them. The vacated area frees space for the revitalisation of an extensive meadow, which refers to a former pasture previously located on the premises. Surrounding the Central Meadow, a main visitor’s route connects all the different elements of the Memorial. A softer access to the area is provided by a one-way road connecting both of the existing entrances to the site, with the parking resolved and aligning along. Each of the places on the journey is dotted with a simple bench to rest and an information board with a schematic map and information about each individual stops in three languages - Romany, Czech and English.

I. The Lipeš pond in the South of the complex, represents the place of forced cleansing at the arrival to the so-called Gypsy camp. The demolition of the pig farm will remove a significant source of pollution and eutrophication of surface and subsurface waters. The proposal improves the stability of the water regime of this wetland and its affiliated streams in regards to the retainment of a larger amount of rainfall in the Central Meadow area, also due to the cyclic connection and consolidation of the waterlogged natural belt between the meadow and the adjacent field. This latter draws the water from the wooded hill Babina above the camp to the alluvial valley of the Lipeš pond and the Krahulik stream, which springs from it.

II. The restored pedestrian path along the pond, which now leads through the road class one to the adjacent forest, gives access to the stone quarry. The natural processes gradually reclaiming back the mined part of the earth, covers the memory and the truth about the forced heavy labor which took place here, a labor building up the road embankment behind which the quarry is located. Further traces of mining in the form of smaller clusters of voids from extruded granite deposits or piled stone plains can be found in the forests near the former camp. The breaking, crushing, transporting and repositioning of the stone by camp prisoners was reflected in the architectural language of the visitor centre, located on the opposite side of the imaginary axis of the territory (the former central road of the demolished pig farm).

III. The visitor centre, the so-called Living Monument, creates a counterpoint to the quarry in the highest point of the buildable area and is a dominant feature clearly visible at distance. Similarly to the monument by sculptor Zdeněk Hůla for the temporary burial ground, it is designed as a free composition from different volumes. However, they are not fragments of a sphere, but structurally assembled similar masses, close to the block, differentiated by scale and orientation. Together they form a cluster of concrete blocks reminding of the stone deposit and referring to the mining in the quarry and in the surrounding forests. The building sits at the intersection of the main pedestrian road with the service one, following on the original forest path. The abstract concrete shell is carved solely by its front door; to the exception of the chapel and the residential units, the openings are only facing towards the inner courtyards. The individual block volumes contain the reception, the exhibition spaces, the café, the multifunctional room, the technical facility and the already mentioned chapel and two units intended for short-term residencies. The construction of the building can be phased through selected blocks. The interior of the cluster is conceived as a “living space of the users”. Rather than a financially demanding concrete sandwich or a thermal insulation held by powerful forces, the use of a special system of internal insulation with an artistically conceived painting created by a Roma artist, is considered. The implementation of a new segment of the forest should follow the construction of the Living Monument.

IV. The area of ​​the camp yard, which was historically the oldest part of the complex, was chosen as a reminder of the site of the concentration camp. Just as the old military boots and the bare feet of the prisoners were digging into the clay of ​​the courtyard and their tiny objects were disappearing in it, the new Plateau is another layer to the palimpsest of this place's memory. Archaeological probes uncovering the traces of the camp are cut into the water permeable concrete paved surface. The slab is also diagonally intersected by the remaining columns of the former pig farm fence, which mesh has been woven with flowers since 2014. The Plateau is a symbolic tombstone to the victims, whose names are carved into the stone curb. This sacred pedestal will be the place for reminiscence and pious ceremonies. With the mesh of the fence removed, the Plateau finally reconnects the previously divided area in which cut, roses symbolically grow. If the Plateau is the tomb, the visitor centre is its headstone.

V. The burial ground with the memorial by sculptor Zdeněk Hůla is newly accessed by a footpath through the forest, connected to the Eastern part of the visitor’s route, which used to originally lead to the former camp. On the Eastern edge of the site, the wall formed by the young spruce wood will be removed. Similarly to the Southern edge, the area will be completed with dispersed new oaks, aiming to create a closed intimate clearing in the forest, protected from the road and its parking. We recommend the removal of the irrigation system. The grass mixture (enriched with low flowering herbs) intended for shade for local habitats of acid oak forests has the capacity to naturally grow in this location and will further add to the strong atmosphere of the place.

VI. As a memento of human indifference, which to this day stands behind the relativisation and negation of the suffering of prisoners in the so-called Gypsy camp and hence also the initiation of the pig farm itself, the proposal leaves some of its small fragments. Five repeating ramps which transported pigs to the slaughterhouse at the Western edge of the now emptied meadow, and eventually the “turnstile” at the main entrance gate used for the same purpose, reveals and stands as a proof to the monumental scale of the former site that has been dishonouring the victims of the Roma and Sinti Holocaust for decades.

In terms of the landscape perspective, two levels of different required treatments are to be distinguished. On one hand lies a system of communities close to nature, and on the other, the understanding of traditional elements of our own rural landscape. The sustainability of all elements requires, first and foremost, a work with the species and cultures, which have a natural or a potential occurrence under existing habitat conditions. Once established and with appropriated initial care, they should function without intensive human intervention and energy inputs.

The natural framework presents a successive site of a hygrophilous belt at the threshold between the central meadow and the surrounding fields, and hygrophilous and wetland biotopes around the pond and stream waters. After the removal of the waste pond, we propose their interconnection and consolidation. It is important to preserve all levels of the vegetation: the herb-grass, shrub as well as the tree systems. In the future, these places are planned to be non-intervention areas.

The new segment of the forest near the Memorial, will have a high level of representation of tree species, with a predominance of deciduous trees (winter and summer oak, birch, hornbeam, field maple, buckthorn) over the coniferous ones (pine).

The design envisages the planting of various ageing trees in a combination of forest seedlings and older garden sprouts for a faster effect on the landscaping. It works environmentally with the local habitat of acid oaks and oak groves, completed by an appropriate herbaceous-grassy undergrowth. For the visitor and the landscape, it offers a permeable, colourful and diverse forest.

The Central Meadow represents an extensive herb-grass community of the local biotope of mesophilic oat meadows. To reduce maintenance as well as to present an attractive demonstration of natural management of the cultural landscape, the design offers the possibility of managed grazing of the permanent grassland. It is a non-intensive method through the grazing by sheep brought only twice a year, in defined areas of ​​the meadow.

The landscape is completed with solitary trees and draws. Lower in the more humid locations of the meadow, species of ash-alder meadows (milk and sycamore maple, brittle willow, alder, ash, bird cherry) will be planted. Above the water-logging boundary, acidic oak forests and oak-hornbeam species will be applied (see the segment of the new forest).

From an architectural point of view, the sustainability of the proposal is perceived both in connection to the recycling of a part of the material from the demolition work of the pig farm and with regard to minimising the energy required for the running and maintenance of the new building.

The first is related to the use of the inert recyclate for the base and abrasion aggregate layers of the new roads and structures, or as additive for the new concrete structures.

The second concerns the materiality, construction-technique and energy-technology design and the quality of the execution. Whether it is the new network of roads made of mechanically reinforced aggregate, the concrete blocks of the Living Monument, the concrete slab or the new furniture, the proposal is always designed with regard to durability and the natural ageing of the material. This also relates to the thermal insulation layer, which, as part of the interior of the building, reduces the impact of potential vandalism and possible natural pests on the exposed exterior.

Although the new visitor centre is planned to run fully only during opening seasons, the emphasis is put on maximising self-sufficiency and energy efficiency of the building.

Despite the fragmentation of its structuralist form, there is a clear attempt to reach a compact shape of this cluster of concrete blocks. All rooms, where it is needed, such as the cafeteria, the multifunctional room, the office and the accommodation units, have windows oriented towards the South, with possible shading provided by the other neighbouring volumes or the vegetation present in the courtyards. The other spaces are oriented towards the North to obtain diffuse light (exhibition spaces) or towards the shade gained by the future segment of the forest (chapel) or are without windows (storage spaces and technical facilities).

The building will be connected to the existing engineering network through a low voltage link to the remaining electric station in the Southern part of the premise and running to the LV line near the demolished last hall of the former pig farm.

The access to water is resolved through the connection to the nearby waterworks. The waste will be discharged into the infiltration polder of the new segment of the forest, after being cleaned by a domestic wastewater treatment plant. The reuse of purified water will be examined in a possible follow-up study, as well as a potential application of a flat-plate heat pump and a hot-air heating/cooling system with heat recovery. 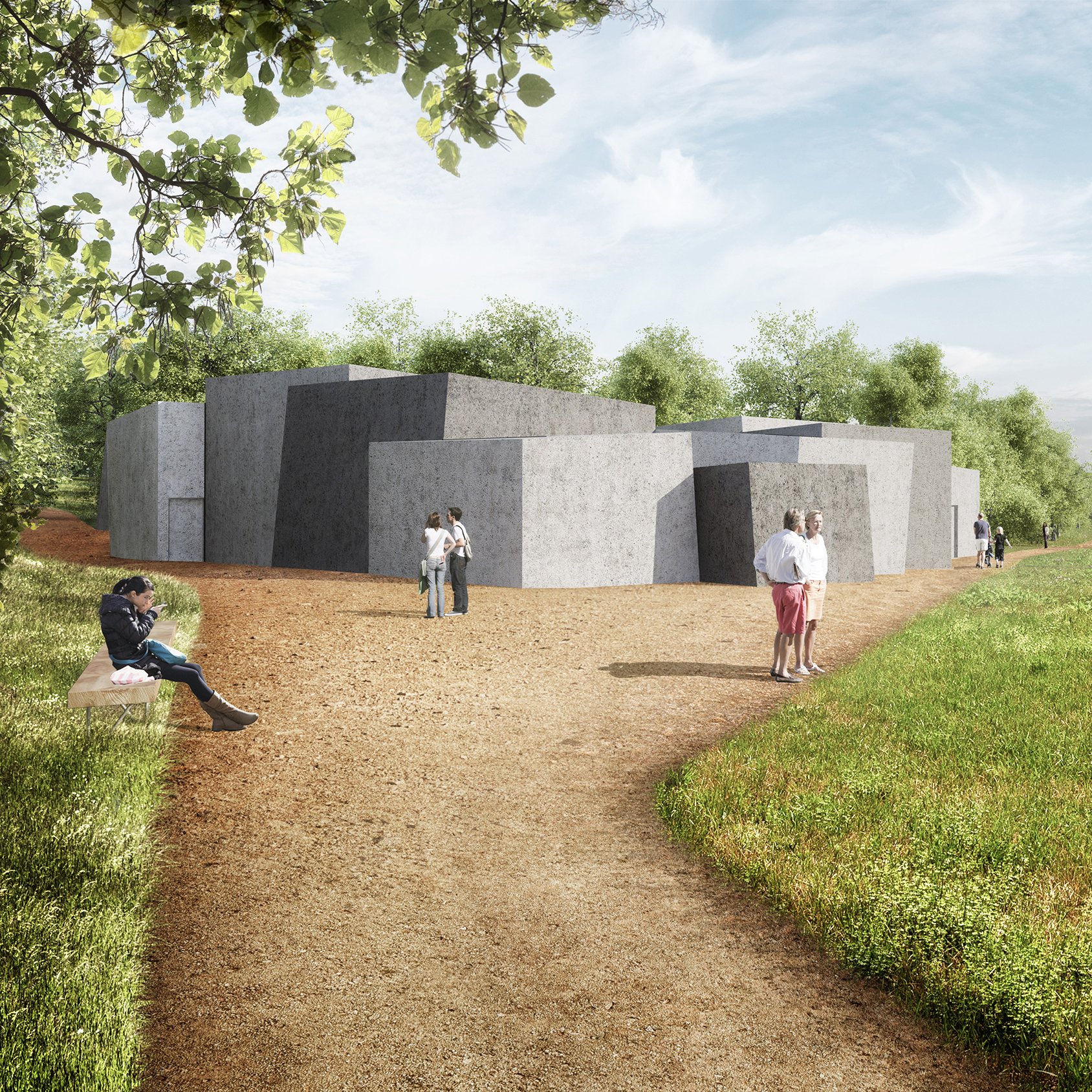 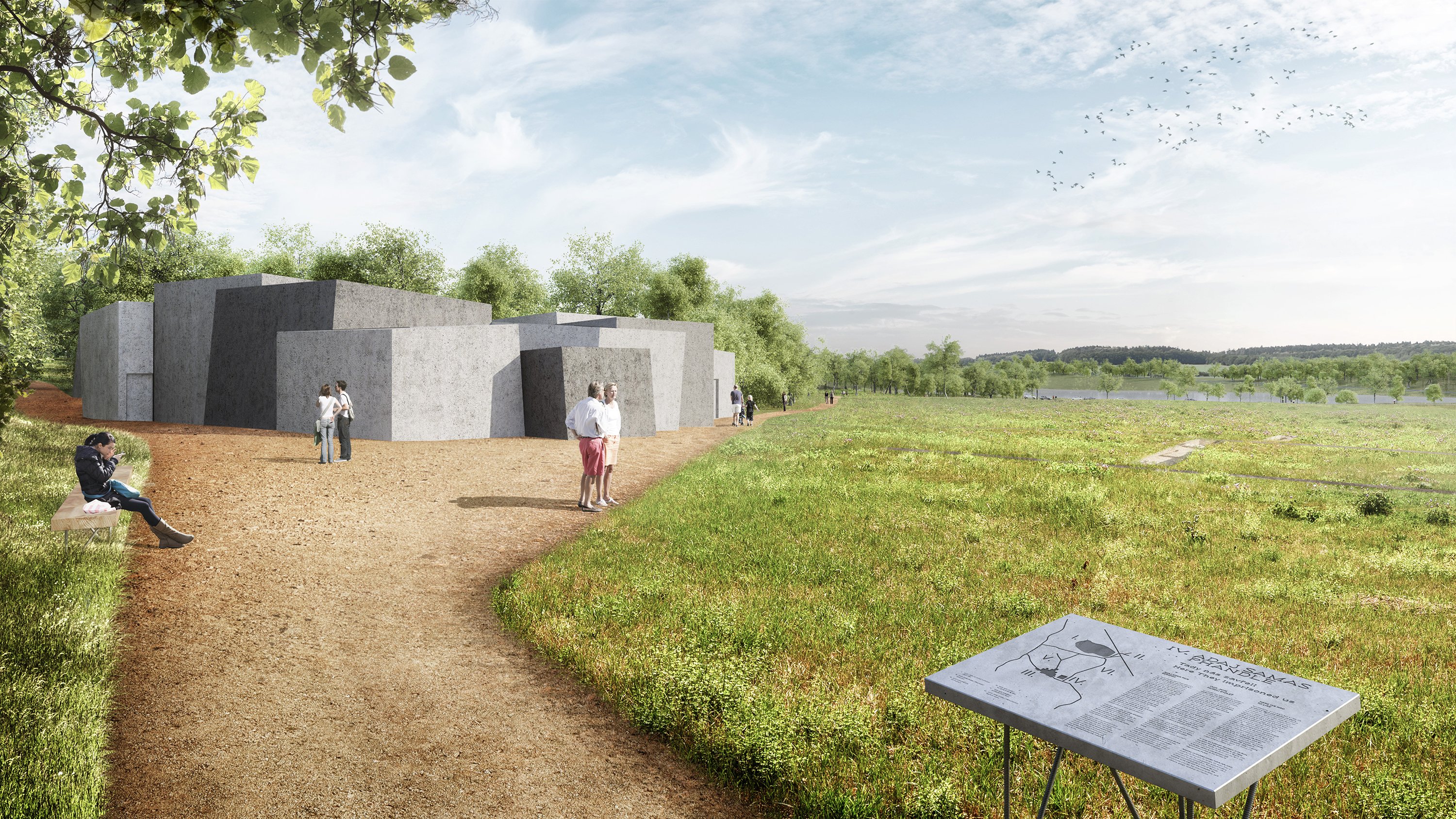 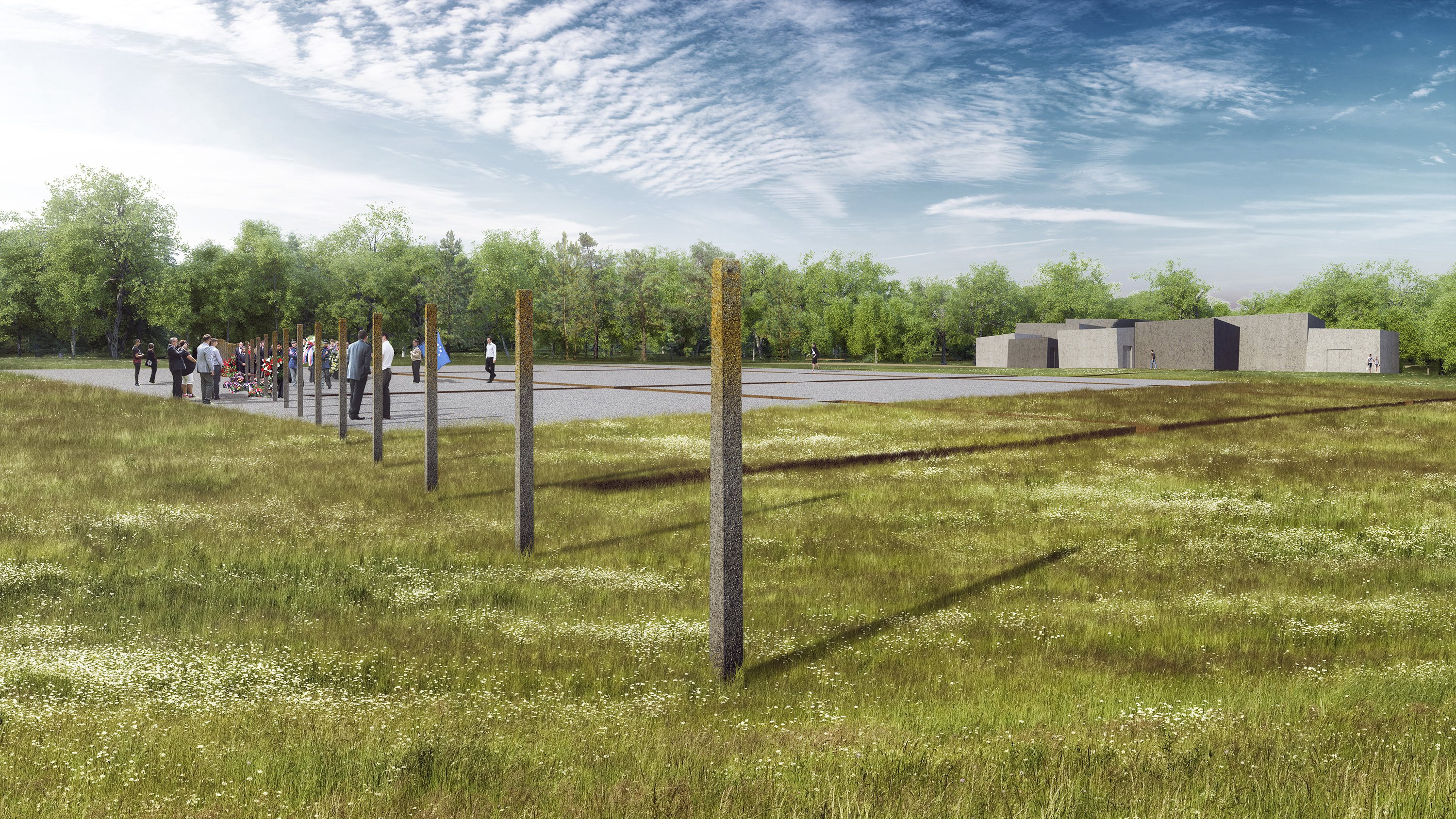 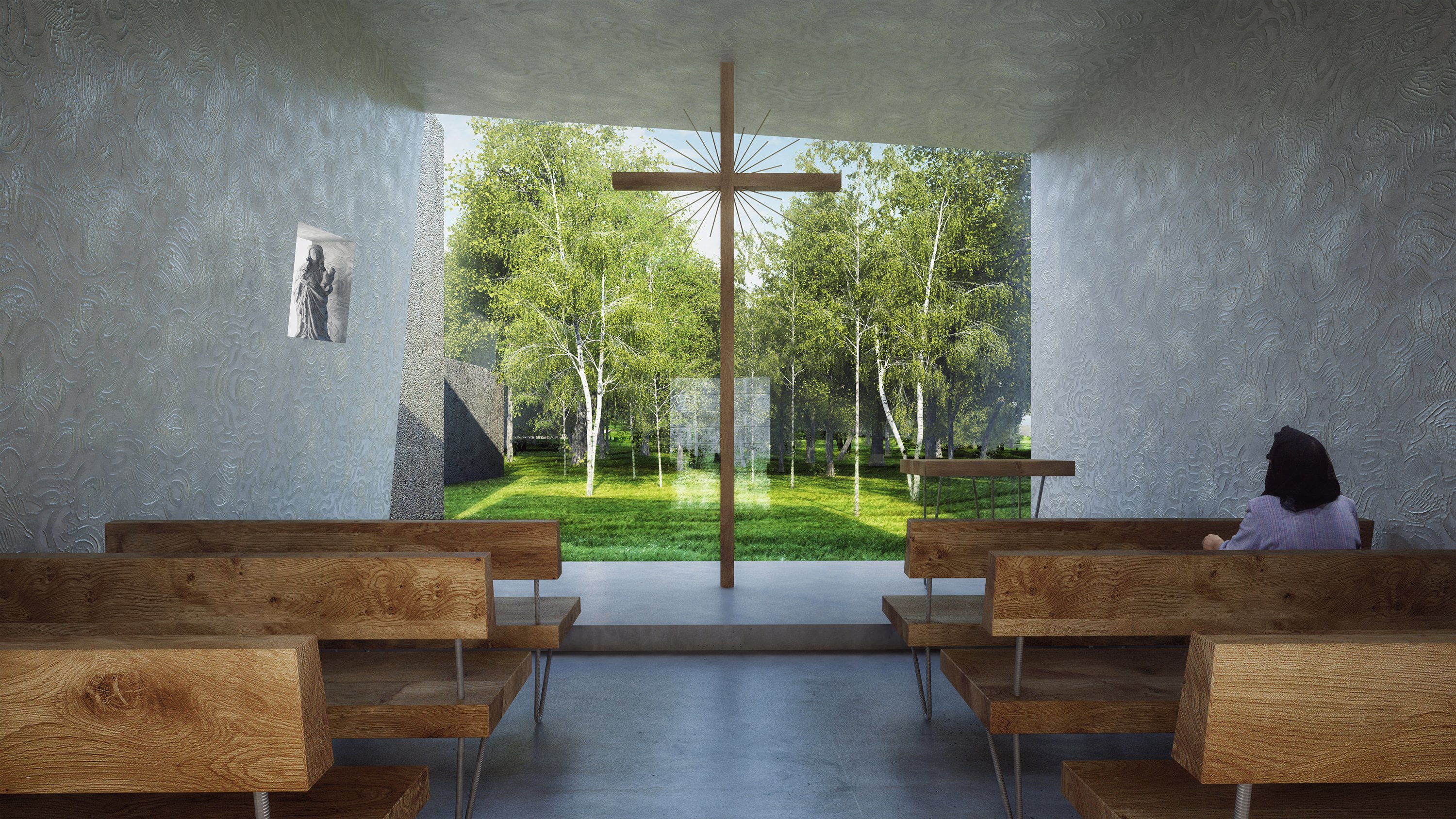 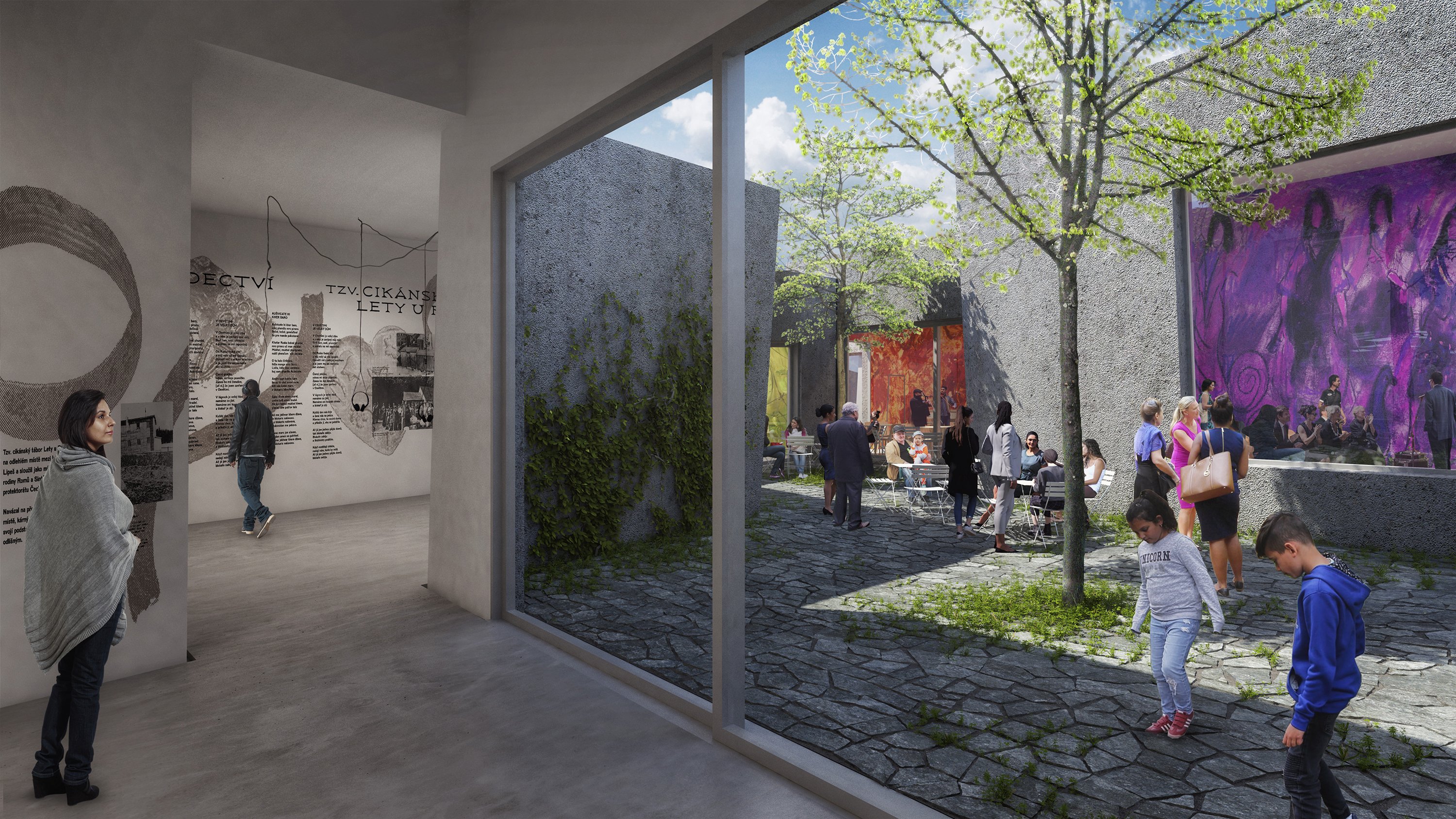 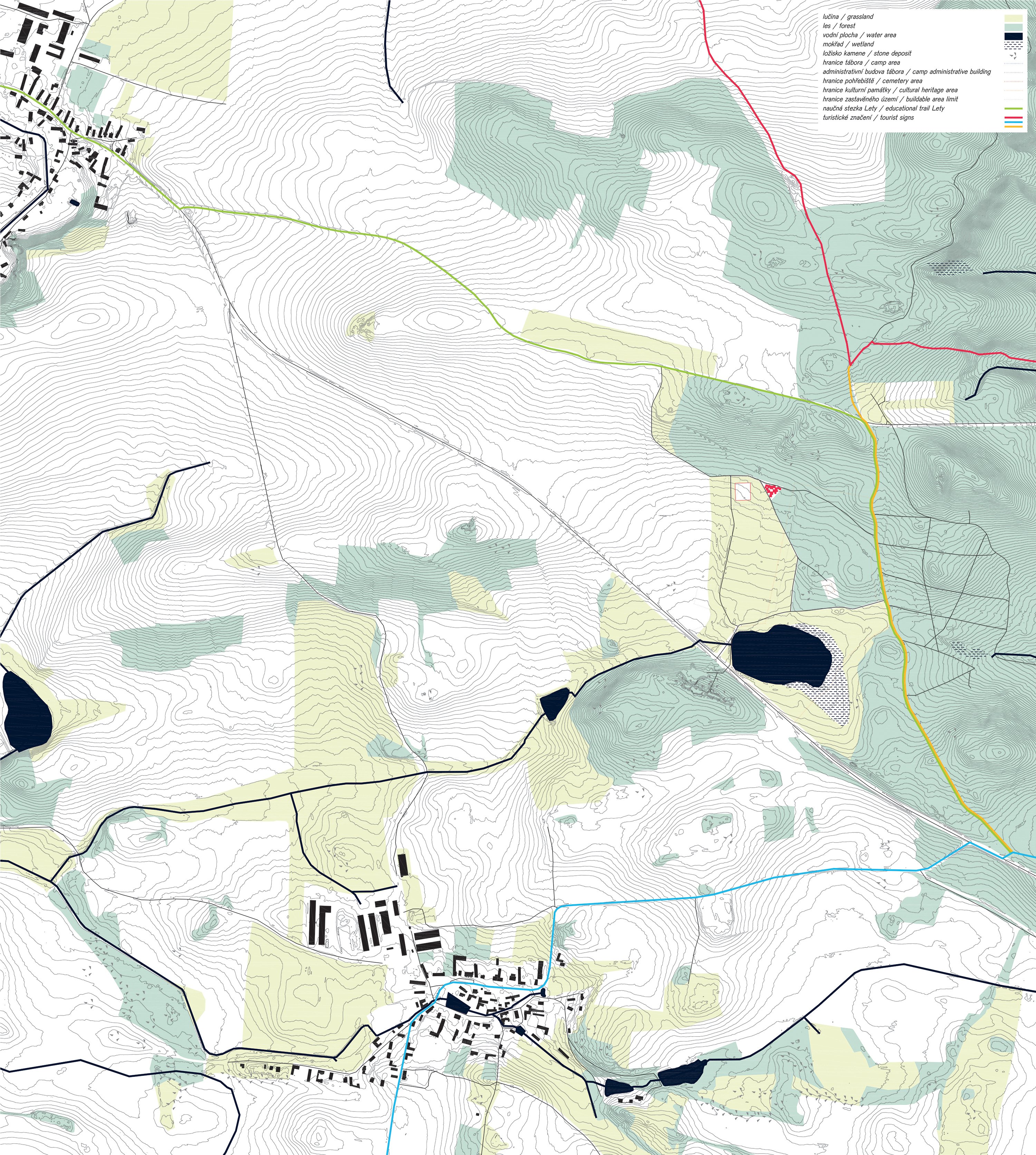 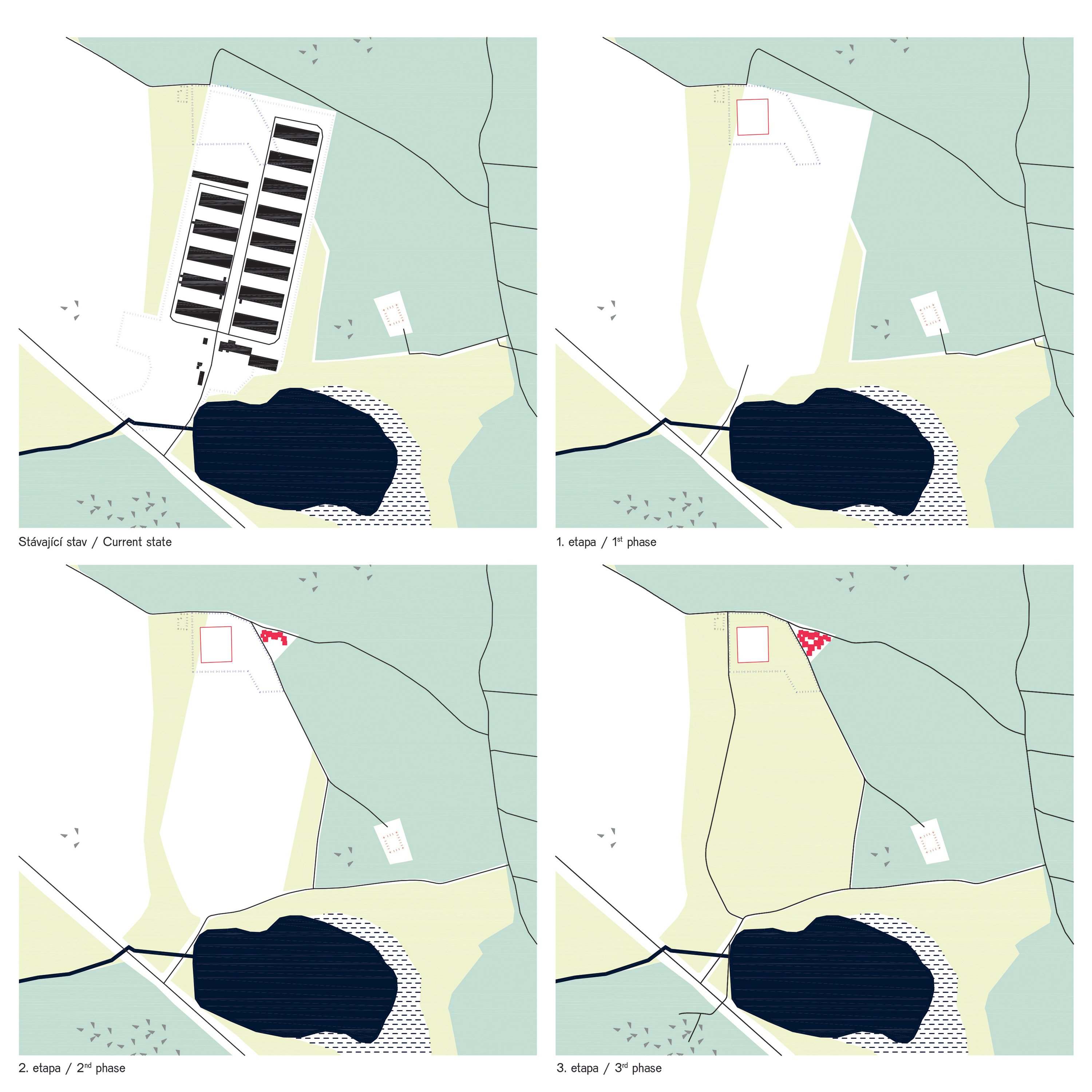 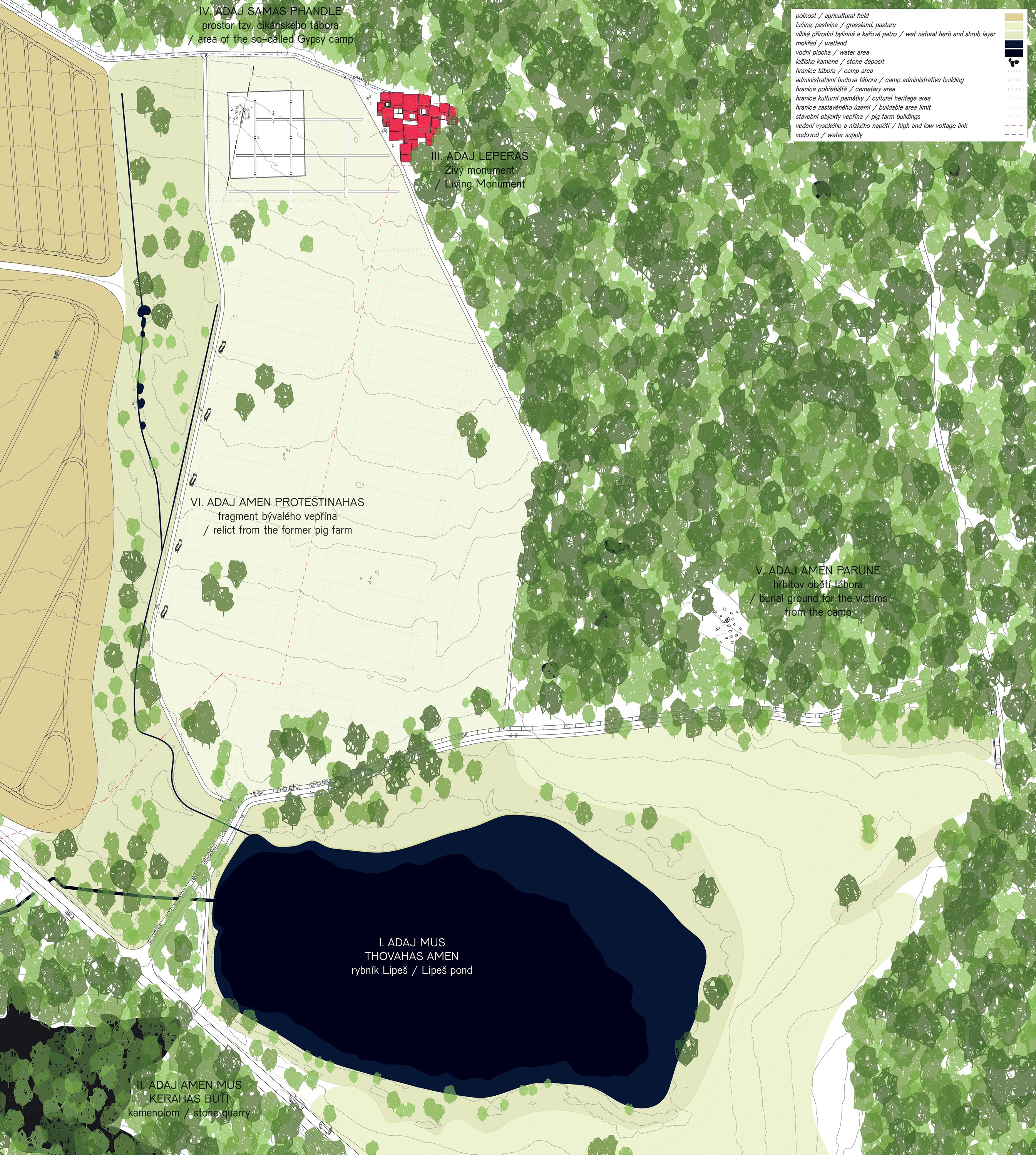 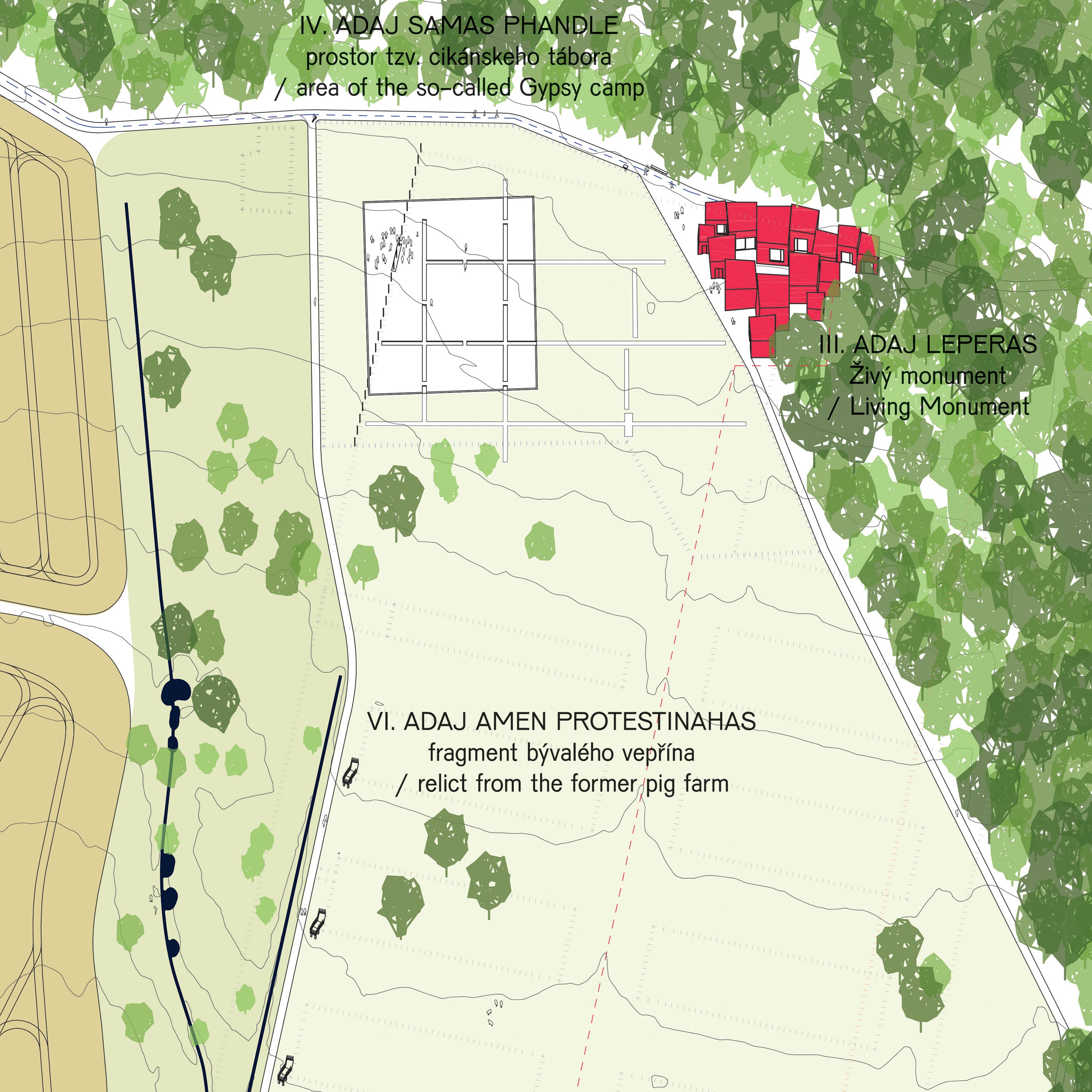 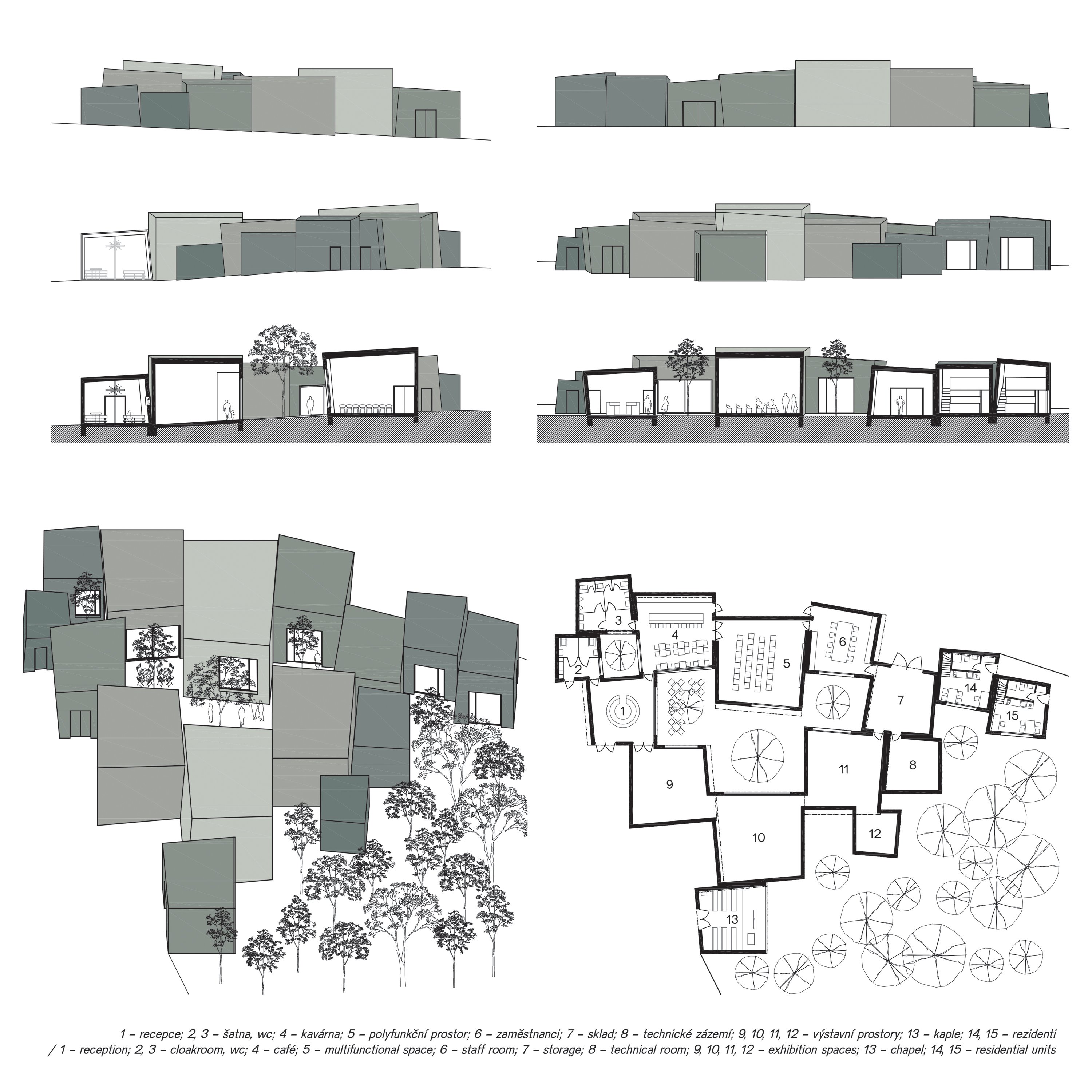 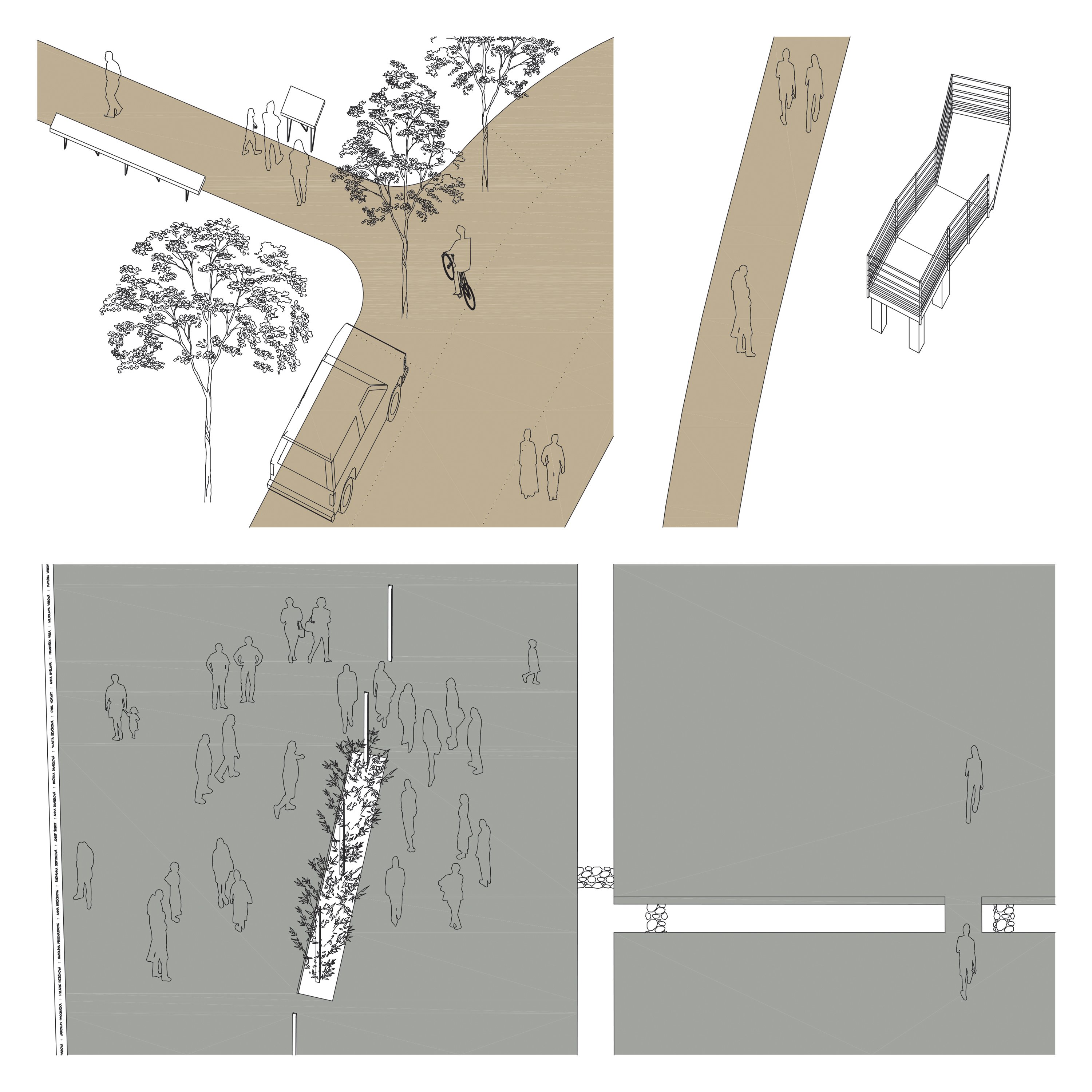 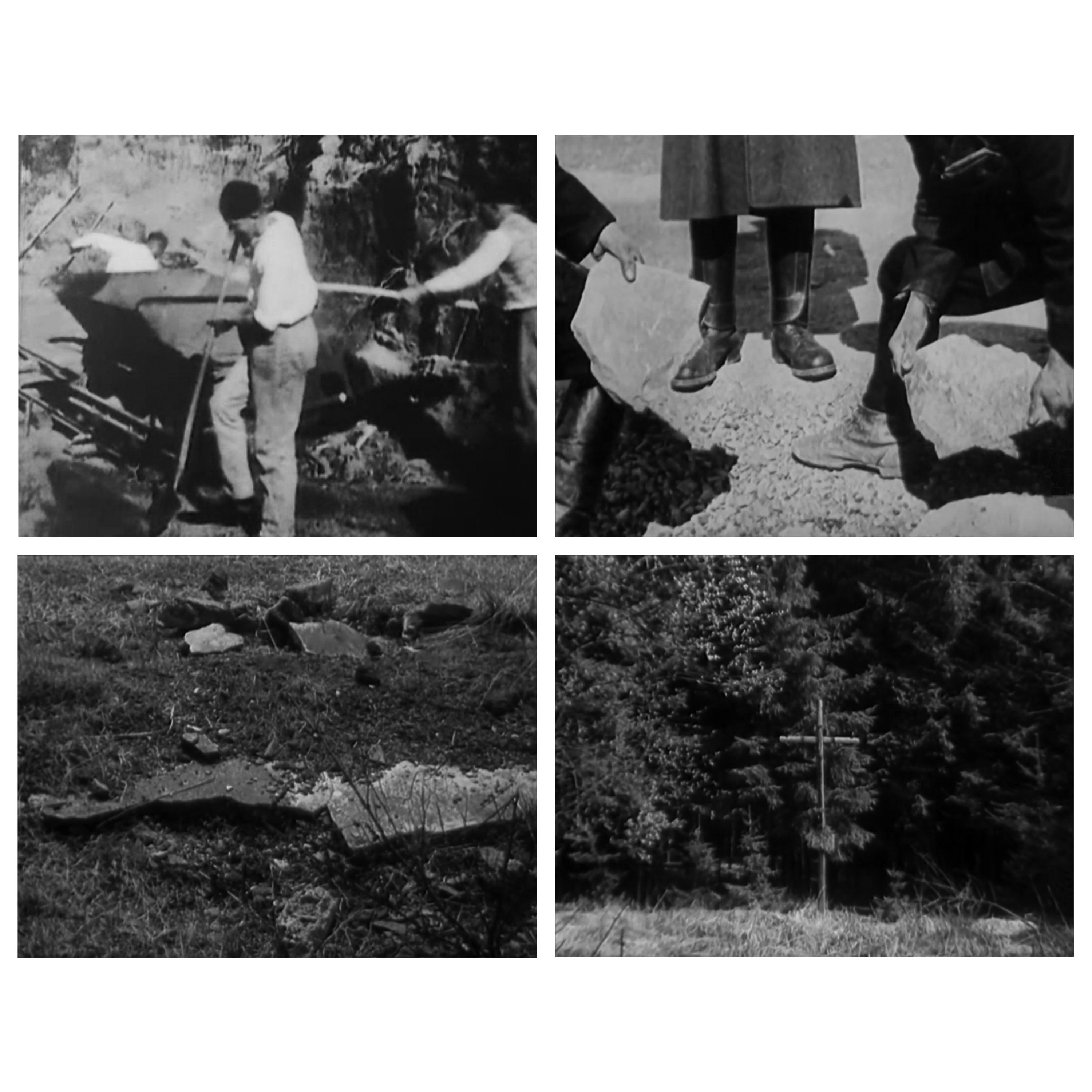